Kristen Gibbs is a classical and contemporary harpist in Austin Texas. She provides Harp music for weddings, private parties, events, restaurants, hotels, and any special occasion.  Kristen plays a large variety of music styles including Pop, Blues, Country, Classical and More. She performs as a Solo Musician or with her 3 piece Band. She services the Greater Austin Area. She also teaches harp and gives harp lessons out of her studio in Round Rock and North West Austin.  Please contact Harpist Kristen Gibbs for booking and pricing.

Kristen has performed at countless events in the Austin area, venues include:

Subscribe to the Email list and be notified to when and where my next gig will be! 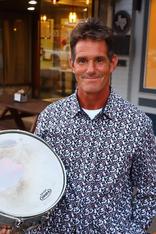 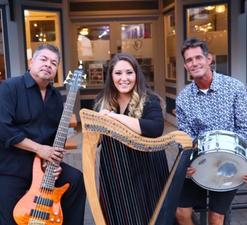 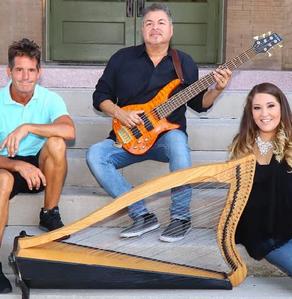 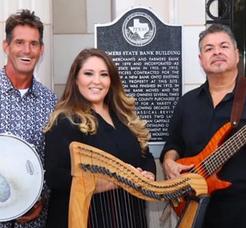 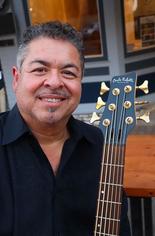 Bassist Bob Ojeda,  was classically trained since the age of 15. He is recognized as one of the best bass players in Austin Texas. Bob plays all genres including, classical, jazz, pop, contemporary, country, rock and roll, and heavy metal. He plays guitar as well as the electric bass. Bob performs all around the Austin area with several bands and several performers.  He has been playing the bass for "The Kristen Gibbs Band," for almost two months.  Bob plays bass in the band providing a skilled and unique sound. "The Kristen Gibbs Band," performs at various venues and plays all different styles of music. The rich sound and elegance of the bass adds just the right touch to the three piece band, perfect for any event.

Rich Chilleri was born December 20th, 1965. Raised musically in NYC, Philadelphia, New Orleans and Austin with a wide array of style and selection. He's been playing the drums since he was 11 years old. Rich is recognized as one of the best drummers in Texas. Rich Chilleri has toured Europe over 60 times with artists like Ray Charles, BB King, Al Green, Travis Tritt, Doyle Bramhall Jr, Omar and the Howlers, Guy Forsyth, Delbert and Clay McClinton! Rich performs all around Austin with several bands and  several performers at various venues. Rich has been playing that drums for "The Kristen Gibbs Band," also known as "The KGB," for a little over a year. Rich provides the perfect style to each song giving the music a full sound, perfect for any event.

"The Kristen Gibbs Band," also known as "The KGB," is a contemporary three piece cover band (Harp, Vocals, Drums and Bass). The Band plays all different styles of music from the 40's to the present. Covering all kinds of genres including pop, contemporary, country, rock and roll, oldies, and more. Located in the greater Austin area the band plays at various venues creating a fun and entertaining environment. The Band plays for weddings and private parties ready to book at your convenience. Check the calendar and schedule your event today! 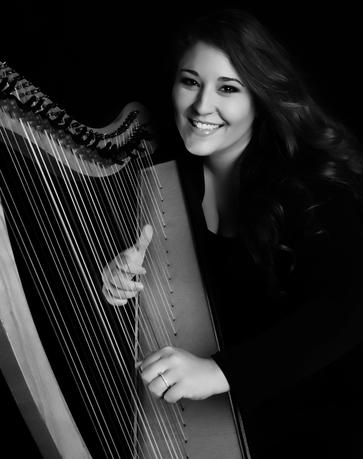 ​​​Harpist and Vocalist, Kristen Gibbs, was born and raised in Austin, Texas. Kristen was classically trained since the age of ten. She is recognized as one of the best classical harpist but is also known for her contemporary style. Changing the traditional barriers of the classical harp world, Kristen is one of few harpists in the nation that incorporates vocals in her performances.  As a diverse entertainer,  Kristen performs in a variety of musical genres including classical, jazz, pop, and contemporary  music. As a young harpist she performed in her school orchestra, recitals, ensembles and played for many weddings, fundraisers, and special events.

Kristen has studied music at Southwest Mississippi and ACC has studied with both Dalaine Fedson (professor of UT-Austin) and Dr. Aryen Huslig (Harpist .  At age 16 Kristen received the "Most Outstanding Musician Award" while attending the U.T Longhorn Music Camp and was awarded the "best high school harpist in the state of Texas" for TMEA Orchestra, four consecutive years. Kristen was selected as the UIL All-State Orchestra Harpist her Junior and Senior year. In 2010 she auditioned for Season 10 of American Idol making it through to round four.

Kristen started her band titled "Kristen Gibbs" in 2011 including a bass player and a drummer. The combination of the three instrument and vocals give a full sound perfect for all venues. Kristen Gibbs performs all around Austin solo or with her band at various venues such as weddings,  hotels, restaurants, private parties, country clubs, galas, cocktail parties, fundraisers, and holiday parties. Kristen is married and had her 1st baby, Addi Lee, in October 2013. Kristen has been  inspired with all the wonderful things she's been blessed with in her life, and writes about it in her music.